What could be the attractions of working in Karratha, an isolated Indian Ocean city in a northern desert region of Western Australia?

Karratha is the primary base for mining and industry in the region and the home of Rio Tinto’s grand iron ore mining operations in Western Australia.
It is also the location of some of Australia's biggest natural resource developments; Pluto LNG and  the North West Shelf LNG  (both liquid natural gas facilities) and Yara International's ammonia and ammonium nitrate production facilities.
There are also sea salt mining and ammonia export operations and this hot bed of industry is poised to grow with massive grants from the Australian government. Its population is projected to expand and the city suburbs are swelling.
A superb new health campus has just been built. At a cost of A$173 million, the Karratha Health Campus is the biggest investment in a public hospital ever undertaken in regional Western Australia.

History and Geography of Karratha, Pilbara

Karratha was founded in 1968 when the local port city of Dampier could no longer accommodate the processing and exportation workforce of the Hamersley Iron mining company and, in the 1980s, the petroleum and liquefied natural gas operations of the North West Shelf Venture.
Aboriginal and Torres Strait Islander people, predominantly Ngarluma, make up 10.1% of the population and it is estimated that the Yinidbarndi, Yaburara, Mardudhunera, and Woon-goo-tt-oo peoples have lived in the surrounding area for approximately 50,000 years.
The city's name comes from the cattle station of the same name, which derives from a word in a local Aboriginal language meaning "good country" or "soft earth". There are excellent Aboriginal tours and ancient rock art in this region which blends ancient history, amazing natural scenery and cutting edge industry.
Karratha is located approximately 1,535 kilometres (954 mi) north of Perth, the state capital of Western Australia and 241 kilometres (150 mi) west of Port Hedland on the North West Coastal Highway. It is roughly rectangular in layout and is located on flat land adjacent to Nickol Bay. Tidal salt flats and areas of mangrove separate the city from the sea. Immediately to the rear of the city (south) lies a line of low hills.
Karratha is composed of 9 main suburbs: Karratha City Centre, Bulgarra, Pegs Creek, Millars Well, Nickol, Nickol West, Baynton, Baynton West, Tambrey and one industrial area, known as both the LIA (Light Industrial Area) and KIE (Karratha Industrial Estate).
Karratha's housing development continues, with new villages and suburbs being built. Baynton West is currently being developed. Also a new suburb going east of Bulgarra with an indigenous name, Mulataga has received council approval. There is current development of a second industrial estate: Gap Ridge which is west of the city, past the cemetery.
Pilbara is Western Australia's second most northern region, defined by the Indian Ocean to the west and the Northern Territory border to the east. The Kimberley region lies to its north across the Great Sandy Desert and the Pilbara's southern reaches border the Midwest and Goldfields regions.
The region covers a total area of 507,896 sq km (including offshore islands). Most of the inhabitants are located in the western third, whereas the eastern third is largely desert with few inhabitants.

Karratha has a hot semi-arid climate with warm to hot all year round temperatures and low rainfall, most of which falls in late summer due to the influence of tropical cyclones and the monsoon. Winter temperatures rarely drop below 10 °C, while maximums stay in the mid to high 20 °C's and days are sunny with low humidity. Summers are very hot and usually dry although the erratic influence of the monsoon can cause periods of high humidity and thunderstorms.

In 2020, the population was 23,118 and this is expected to grow as the industrial and mining labour force expands. According to the 2016 census

Twice the size of the United Kingdom, the Pilbara region in Western Australia has some of the world’s most stunning ancient natural landscapes, dating back 3.5 -4.3 billion years. With over 700 historic Indigenous archaeological sites and 1,000,000 rock engravings (Petroglyphs), many dating back some 30,000 years, the Burrup Peninsula is the perfect place to discover the unique art, history and culture of the Aboriginal people of the Pilbara.

Deep rocky canyons lead to peaceful plunge pools in the beautiful Karijini National Park. Hundreds of islands with dazzling white beaches and untouched coral gardens are yours to explore on the Dampier Archipelago and Mackerel Islands. And yet the Pilbara is also known as the engine room of Australia - home to a massive mining industry in crude oil, salt, natural gas and iron ore. An incredible juxtaposition of two very different industries.

Explore the Pilbara's colonial past in Roebourne, the oldest settlement in the North West. Cossack is a ghost town and has many beautifully restored historical buildings which offer an insight to the hardships and successes of the first settlers. There is also a perfectly positioned lookout here overlooking Jarman Island’s lighthouse built in 1888, the long white sand and sparkling blue ocean that is Settlers Beach.

Travel inland and you’ll experience the unique communities of the rugged outback, from Tom Price, the highest town above sea level in Western Australia, to Marble Bar, the hottest town in the country.

Karijini National Park in Australia’s North West is all about adventure.It’s about exploring ancient rocky tunnels and plunging gorges, paddling through crystal-clear waterways and swimming under stunning waterfalls. And the best bit? Its most amazing scenery is all within easy reach. As you stand amongst the ancient geological formations of Karijini National Park, you feel awestruck at the red layered cliffs that line the spectacular gorges eroded by nature over billions of years. The Pilbara’s gum trees, termite mounds and expansive plains give way to picturesque gorges, refreshing waterfalls and the emerald waterholes of Karijini National Park. A soothing oasis of trees and ferns provide shady refuge as you explore the wonders of this Western Australian national park.

A few more include:

The Pilbara regions and neighbouring Kimberley regions of Western Australia combine to form a million square kilometres of extraordinary grandeur, colour and contrast.

Stretching from Onslow in the south to Kununurra in the north east, the Northwest is rich in pioneer and Indigenous history and breathtaking scenery of ancient rugged ranges, spectacular waterfalls and pristine coastlines. Home to incomparable natural attractions and blessed with a year round balmy climate and a variety of flora and fauna that simply can’t be found anywhere else.

The Pilbara coast offers world-class boating, fishing, diving and snorkelling. Should you visit in turtle nesting season, between September and April, watch out for female turtles laying their eggs and newly hatched babies scrambling to the ocean. Pristine beaches, beautiful coral gardens and abundant fish beckon you to Point Samson. There is another event on Mother Nature’s calendar that you can experience year-round - the incredible Staircase to the Moon occurs on full moon dates between March and October along the Pilbara coast.

The 40 mile beach, Gnoorea Point, offers nature based camping with great fishing from the beach. For off-shore fishing, there is also a natural boat ramp. This is just 56 km south of Karratha 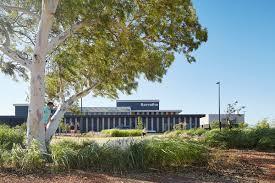 Opened in 2018, the health campus has been built in the town’s centre and replaces the old Nickol Bay Hospital, now permanently closed. It has world class healthcare facilities bringing together many services under one roof and providing valuable support to smaller regional hospitals including Roebourne, Tom Price, Paraburdoo and Onslow.

Search for Medical and Health Jobs in Australia